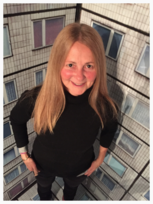 ​Helene has been around the entertainment industry all her life. Growing up with her father, a prominent entertainment attorney, she became immersed in the music industry. After meeting Paul in 1990, Helene began to learn about the film and television industry. Today Helene is the Operations Manager for NYC Post Group along with being our running coach and personal chef.

With many years of experience under his belt, Paul has sound edited, designed and mixed countless Feature Films and Television shows. He has been nominated for multiple Motion Picture Academy and Emmy awards.  Paul was honored with an Emmy award for his assistance in the development of the NoNoise™ restoration software.  He has restored and salvaged many well-known films, as well as helping to keep the world safe by making problematic reality shows intelligible. Although he has won Maverick and ProMax awards, he cherishes the prestigious (and possibly created for him) "Frankenbite" award for making coherent sentences where none existed before. Paul brings ideas and creativity to each project and his primary goal is to fulfill the director's vision.  Paul loves a challenge and has a reputation for being unflappable. 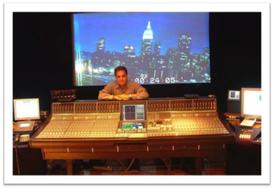 NYCPG was formed in recognition of the need for a high quality, highly skilled, concierge service in the post-production arena. We provide our customers a unique one-stop shop with a seasoned staff of sound designers, composers, and mixers.  Led by Paul Michael, our team specializes and excels in the fast paced, deadline driven world of post-production audio.  Our editing and mixing has been featured in some of the most popular shows produced for TV.  In addition to our TV,  Promo, Web, Radio and Corporate work, NYCPG  has a major presence in Independent feature films with a long list of award winning projects.  We are also specialists in restoring unusable production sound using proprietary techniques developed by NYCPG.

Services we offer, (include but not limited to): Mixing in 5.1 or TV stereo, Voice Record (Wild or To Picture), Foleys, Sound design and original Music Compositions.  We are experts in all of the standards and deliverables for Film and TV. Those standards include: The Calm Act (LKFS & LUFS), Domestic and International stems, filled M&E’s and Dolby Printmastering just to name a few.

​NYC Post Group founder, Paul, saw the need for a facility with the talent and agility to quickly recognize our customer’s needs and match them with the right engineers for their project.  This approach streamlines and optimizes the workflow insuring a fast turnaround that's focused on quality.  NYCPG has the added capability to work remotely on projects that originate out of the New York area through the use of FTP and file sharing services.  Our cost effective techniques translate to great rates for your project.